The Keys to the Pennant Race

Last year the Dodgers clinched the division on September 26, 2015, when they beat the Giants 8-0. Kike Hernandez hit 2 home runs off of Madison Bumgarner. That game was one of my favorite games of the season. Players such as Clayton Kershaw, Kike Hernandez, Chase Utley, and Adrian Gonzalez were key players to the Dodger’s success.

KEY PLAYERS IN THE NL WEST

The Giant’s ace Madison Bumgarner has just about everything that they need. He eats up innings that they don’t want to use the bullpen for, he can hit well for a pitcher, and he has determination. In 2014, MadBum was awarded the World Series MVP after pitching 3 innings in relief as the Giants defeated the Royals. Even if the Giants must settle for the Wild Card Game, Madison Bumgarner will likely lead the team to a well-played game.

Even though Clayton Kershaw spent 2 months on the disabled list with a mild herniated disk in his back, he is Ace-like once again. The lefty has what the Dodgers have been lacking, distance. Once you reach the post-season you need players who can go into the game and pitch well, Kershaw does this. The 3-time Cy Young award winner, 2014 NL MVP, the 6-time All-Star, and 2011 Gold Glove winner has just about everything that it takes to drive the Dodgers through the post-season. 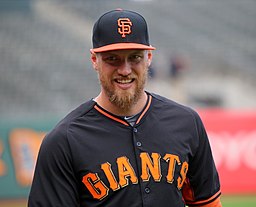 The 33 year old right fielder has taken the Giants through all sorts of times. He led them to a World Series victory in 2014 and has always seemed to carry the team. He goes out to play every day, even if he is not in the starting lineup. He is always mentally in the game and never gives up. When he was shut down in June due to a pulled hamstring, the Giants seemed okay at first but it was soon clear that they needed him.

The Giants will not go down without fighting, even if the Dodgers clinch the division they have their eyes on the Wild Card game. After 2014, when they made the playoffs due to the wildcard spot I know that they never give up. These last few games will be very interesting as we see who will come out on top.

Next Story:
First Place For Good!

About the Author / Micah Gutman

Hi there! My name is Micah. I'm a junior in high school and I play on the school baseball team. I've had a passion for the Dodgers for many years and I enjoy writing about them. Beyond baseball, I love playing guitar, chilling with my friends, and reading memes.